“This year’s report is more robust than ever with the addition of data for the advanced heart failure subspecialty designation,” notes MedAxiom President Gerald (Jerry) Blackwell, MD, MBA, FACC. “We’re also excited about the potential to marry our survey data with the National Cardiovascular Data Registry in future years, thanks to our new relationship with the American College of Cardiology.” 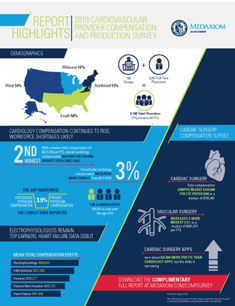 “I find the MedAxiom Cardiovascular Compensation & Production Survey Report to be very valuable as we review trends and see how our group’s compensation and production levels measure up with our peers,” says Jonathan Fialkow, MD, chief population officer, Baptist Health South Florida. “It provides us with a comprehensive resource as we plan and make decisions for the upcoming years.”

For the fifth year in a row and for the seventh year out of ten, overall cardiology compensation increased over the previous year in 2018, with a median total compensation of $577,329 per full-time equivalent (FTE). Both private and integrated physicians saw increases, with the gap between the two cohorts closing to one of its lowest levels (11 percent) since the integration wave of cardiology began in 2008. In terms of real dollars, private cardiologists earned just under $65,000 less per FTE than their peers in integrated settings.

Continuing its tradition of evolving with the changing marketplace, MedAxiom began collecting data for the new subspecialty of advanced HF several years ago. In its inaugural reporting year, HF cardiologists, who comprise just 2 percent of the cardiology workforce, debuted with median total compensation of $441,845 per FTE, 10 percent lower than general non-invasive peers.

Overall cardiology production has remained quite stable over the past five years. Private cardiologists continue to outpace those in integrated models in terms of overall wRVU production levels.

After falling back in 2017, cardiac surgery total compensation surged forward in 2018, jumping nearly $194,000 per FTE physician to a median of $795,461. Vascular surgery also increased by a modest 2.5 percent to a median of $491,072 per FTE. Cardiac surgeons out earned vascular surgeons when considering overall results and for those employed or integrated with a hospital or health system.

Cardiac and vascular surgeons who are integrated with a hospital or health system earned nearly identical total compensation per wRVU rates.

Cardiac and vascular surgeons continued to utilize more APPs per physician FTE than cardiologists, a pattern that has remained relatively consistent over time. The stagnant utilization of APPs, particularly in cardiology, is surprising given the current heavy focus of programs on expanding access and reducing costs.

However, cardiology APP total compensation, measured at the median, has been steadily increasing over time while cardiac surgery APP total compensation has remained relatively flat.The median production for a full-time cardiology APP has been trending steadily upward over time. Still, at 918 wRVUs, this production is well below the reasonable ability of an APP to generate wRVUs over the course of the year, which points to two main probabilities: 1) the work performed by the APPs is being billed under the physician provider number; or 2) the APP is performing mostly non-billable work.

Nearly half of groups have some form of non-clinical incentive compensation. Of note is the size of the pools of “available” hospital incentives, which in 2018 found half the groups had over $1 million in potential earnings at risk.

A total of 184 groups, representing 2,267 full-time cardiovascular physicians, completed this year’s MedAxcess survey (providing 2018 data). In addition, there were 146 part-time physicians whose data were used in some of the findings, particularly the section on volume trends, for a total of 4,108 providers (physicians and APPs). The median size of the responding groups to this year’s survey was 13 FTE physicians.

What does the 2019 Cardiovascular Provider Compensation and Production Survey mean for your organization? Join report author Joel Sauer for a webinar on Sept. 12 from 1-2 p.m. ET to review this year’s trends and learn how you can use this essential strategic planning tool to optimize your organization. Register now.