Consolidation Must be in our Future 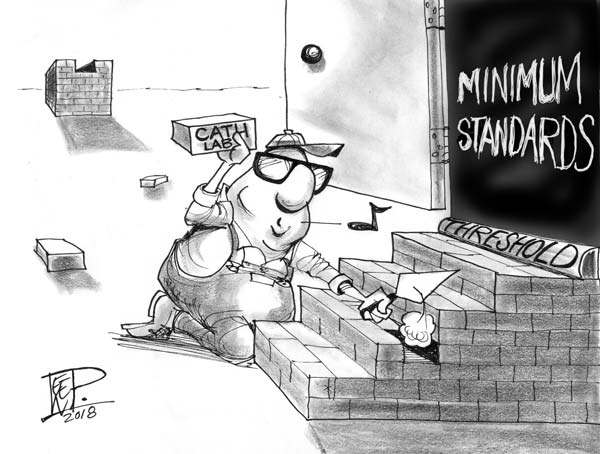 At our recent CV Transforum Fall’18 conference in Austin, Texas, I had the privilege of co-presenting on program consolidation with Jeff Carstens, MD. Jeff is the Executive Medical Director for the CHI Health Heart & Vascular Institute located in Omaha, Nebraska. Over the past decade, Jeff’s program has completed several very difficult cardiovascular program consolidations, including going from three open heart surgery programs to just one, consolidating interventional programs and call teams, and merging several disparate groups into a single cohesive unit.

As noted, none of this was easy, but it was necessary in order to maintain and improve high-performing programs. Through consolidation Dr. Carsten’s programs achieved higher quality, better patient experience and lower overall costs. In addition, consolidation provided a higher quality of life for both the physicians and staff charged with covering these services. Summed up: the juice was definitely worth the squeeze.

Based on the less-than-robust attendance at our consolidation breakout session, this topic must not be on the minds of many of our US cardiovascular programs. Granted we were up against stiff competition with the other breakout topics, but I was expecting a pretty full room. Why? Based on the data we need to do some pretty serious consolidating, and I think it needs to be done in the very near future.

The Society for Thoracic Surgeons (STS) – the definitive body for setting clinical standards in CV surgery – defines low volume open heart programs as those that perform less than 200 cases annually. The STS’s own definitions and data in Table 1 finds that nearly 80 percent of US cardiovascular surgery programs are in the “low volume” category. In fact, a large percentage of these “low volume” programs are even below 100 open heart cases annually. Conversely, nearly half of all open heart surgeries are performed by around 20 percent of programs.

While studies have failed to link quality with volume in adult heart surgery programs, there are certainly other factors to consider. Covering call is a big one. Even a program with just 100 annual open heart cases will most likely require two surgeons to provide adequate call coverage – adequate being 1 in 2, which many surgeons may find onerous. If the volumes are split equally this is just 50 cases per surgeon per year, or around one per week. An already low volume must be halved in order to appropriately provide a sustainable lifestyle.

You might be asking: if the patient isn’t being harmed by the low volumes and the program is willing to fund it with two surgeons, all is good--right? If we had an ample supply of cardiothoracic surgeons the answer might be yes, but that’s not the case.

According to the American Association for Thoracic Surgery the United States will be facing a critical shortage of cardiothoracic surgeons by 2035. Part of this equation is related to the number of small volume programs that require more surgeons than their volume alone would justify. This creates the need for more total surgeons than would be required if we had fewer programs each performing more procedures.

Value in healthcare is no longer simply a matter of quality, it also considers cost. There are certain inherent minimum costs that low volume programs must maintain, but that are be spread across a much lower number of cases. This results in a greater cost per case than a high volume center. A simple example is the cost of the surgeons themselves. In our example above, a program with 100 annual cases must retain two surgeons for adequate call burden coverage. By contrast a program with 200 annual heart cases is also able to adequately cover both volumes and call with two surgeons, effectively halving the surgical provider cost (assuming similar compensation). Even if the latter program needed the three surgeons, the cost of the surgical coverage would be about 25 percent less than the smaller program.

Beyond the surgeons you have both the expertise and costs of other critical providers to a surgical program including anesthesia, perfusion, critical care, cardiology and nursing. All are stretched thinner when there are more physical locations and programs to cover. This stuff matters as reimbursements tighten with the future showing no signs of this trend abating.

Cardiology too would benefit from program consolidation, again based on the numbers. According to Advisory Board data the number of interventional programs increased nearly 10 percent between 2011 and 2014, this despite a 5 percent decline in total percutaneous coronary intervention (PCI) volumes. What makes these numbers even more confusing is that the expansion of programs occurred during a period of rapid hospital mergers and acquisitions. So as formerly competitive programs came under the same banner, seemingly providing an opportunity to consolidate services, in fact the opposite happened.

Despite lowering the recommended minimum to 50 annual procedures, data from the National Cardiovascular Data Registry (NCDR) found that as recently as 2015, 44 percent of US interventional operators performed less than 50 annual procedures. Further, according to a study published in 2017, these low volume operators also tended to be in low volume programs1. This same study noted an inverse relationship between PCI operator volume and in-hospital mortality.

MedAxiom’s 2017 data from over 800 interventional cardiologists found that only 16 percent were below the 50 annual cases minimum recommendation. If, however, the minimum was raised back up to 75 that percentage would jump up to 28 – or over a quarter of operators. Table 2 shows data from MedAxiom’s 2018 Cardiovascular Provider Compensation & Production Survey for invasive procedures by subspecialty type.

Cardiology too faces some workforce challenges when looking at the demographics. Simply put, cardiologists are getting old and this puts strains on coverage, particularly given the rigors of the cath lab and STEMI call. Figure 1 shows the age breakdown of each of the cardiology subspecialties. Nearly a quarter of the interventional workforce is over the age of 61. While this doesn’t mean that retirement is imminent, these physicians are more likely to want to reduce or eliminate call burden, cut back to part time during the days or leave the lab.

Like surgery, many interventional programs must staff first to the call burden and second to volume coverage. Given the number of small volume programs – a category that seems to be growing – more interventional physicians are required for coverage than if the same total volume were consolidated into fewer high volume centers. As has already been described this would lower the overall cost of coverage, by reducing the number of required operators, and may also improve quality and outcomes. That’s value!

Consolidating cardiovascular programs is extremely difficult. There are typically major competitive and market issues at play, pride and turf concerns, program support challenges, community concerns and a host of others. All of these elements were at play in Omaha with Dr. Carsten’s program; with lots of planning, meetings with constituents and a whole lot of guts they pulled it off. Were there some rough spots? Of course, but when comparing before and after, the program is better off and stronger.

My guess is that the physician shortages described above will ultimately be the drivers of consolidation here in the US. Our hands will be forced for lack of coverage. While this may be inevitable and fine, it may also create some significant hiccups in care as it unfolds. I can’t help but wonder if a more strategic, proactive and planned approach would be more beneficial. Time will tell.

The MedAxiom blog post is published every Thursday at https://www/medaxiom.com/blog