Heart failure physicians are still very rare in the cardiology workforce, making up just 2 percent of the total (Figure 1). For our survey, the designation of heart failure as the subspecialty type is made

by the group responding. However, the Heart Failure Society of America corroborates how small this population of physicians still is, listing around 200 total fellows amongst its membership. Likewise, the American College of Cardiology includes 792 cardiologists who have received fellowships through its certification process, with another 105 currently in training. 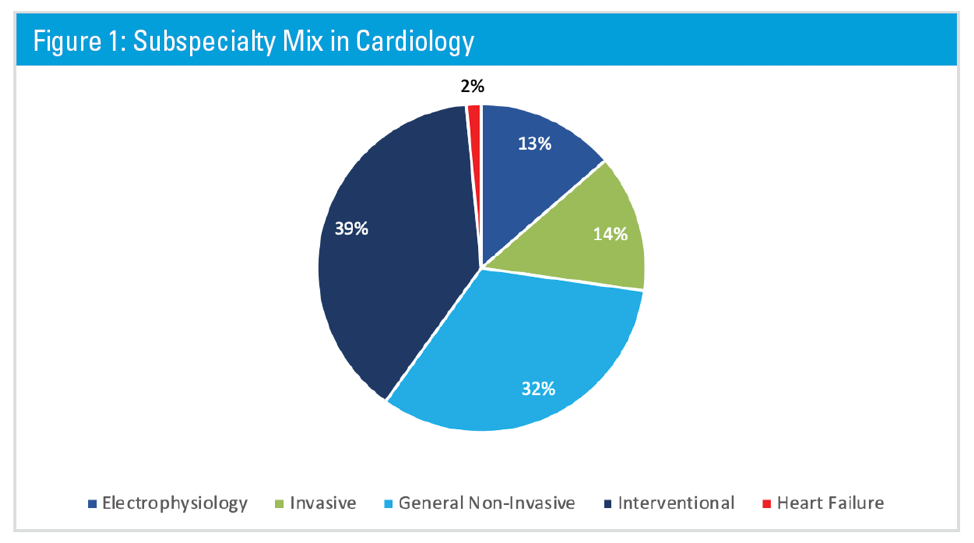 Despite these very small numbers and feedback from the MedAxiom community on the difficulty in recruiting heart failure physicians, compensation for this subspecialty is the lowest among all of cardiology (Table 1) with median compensation of just $441,845 per FTE in 2018. The amount is over 10 percent lower than general/non-invasive physicians, the next subspecialty up the compensation totem pole who earn just under $500,000 per FTE at the median.

On the other hand, heart failure physicians earn the most in terms of calculated (imputed) total compensation per wRVU at $91.64 (Figure 2). This is because these cardiologists generate the fewest work relative value units (wRVUs) per FTE coming in at just under 5,000 wRVUs per year, 65 percent less than the next lowest subgroup, general/non-invasive, who sit at 8,241 annual wRVUs per FTE. So, whereas compensation is nearly 90 percent of general cardiologists, production for heart failure doctors is just 60 percent, resulting in a significant difference in calculated total compensation per wRVU. 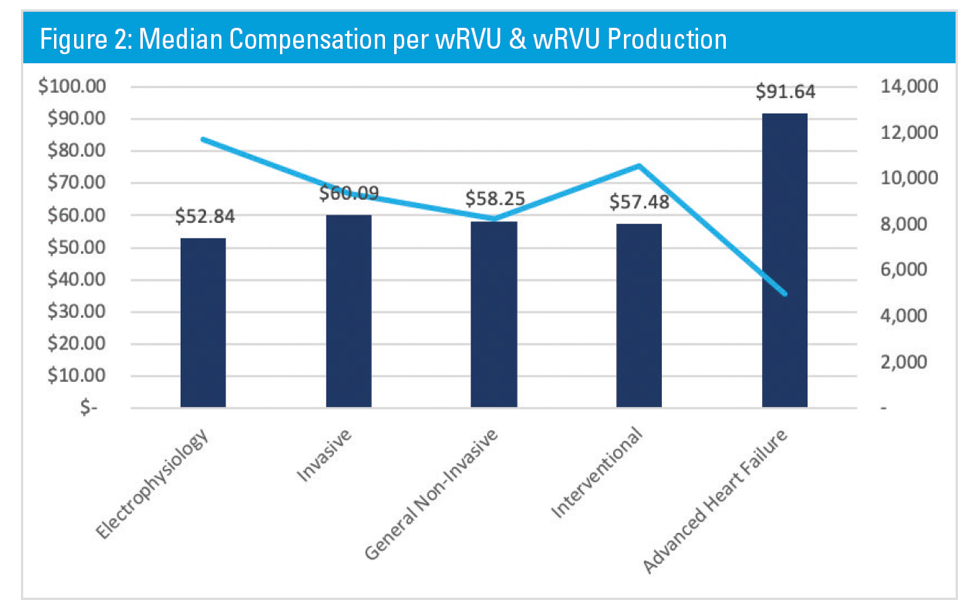 The total compensation per wRVU calculation, which is one of several metrics tested as part of a fair market and commercial reasonableness analyses for hospital employed physicians, can sometimes trip up groups that want to pool compensation and then split their monies equally (often called the “equal split” or “lump and split” model). Cardiologists with lower wRVU production tend to have high calculated total compensation per wRVU in these equal pool distributions, which can cause heartburn for those charged with ensuring regulatory compliance. This can often come into play with general/non-invasive cardiologists and will only be worse, based on the 2018 data, for heart failure docs.

So why is heart failure cardiology production so low? One answer is the amount of Evaluation and Management (E&M) work – good old-fashioned face-to-face exam room visits and hospital rounds with both new and established patients – that these physicians perform. This work is captured by the CPT codes in the range of 99201 to 99299, for those that want to think in terms of billing codes. Heart failure physicians generate nearly two-thirds of their total wRVUs from these types of encounters (Figure 3), which tend to take more time per wRVU than procedures and test interpretations (like nuke and echo). Likewise, general/non-invasive cardiologists are close on this metric, with 60 percent of their production coming from E&M work. 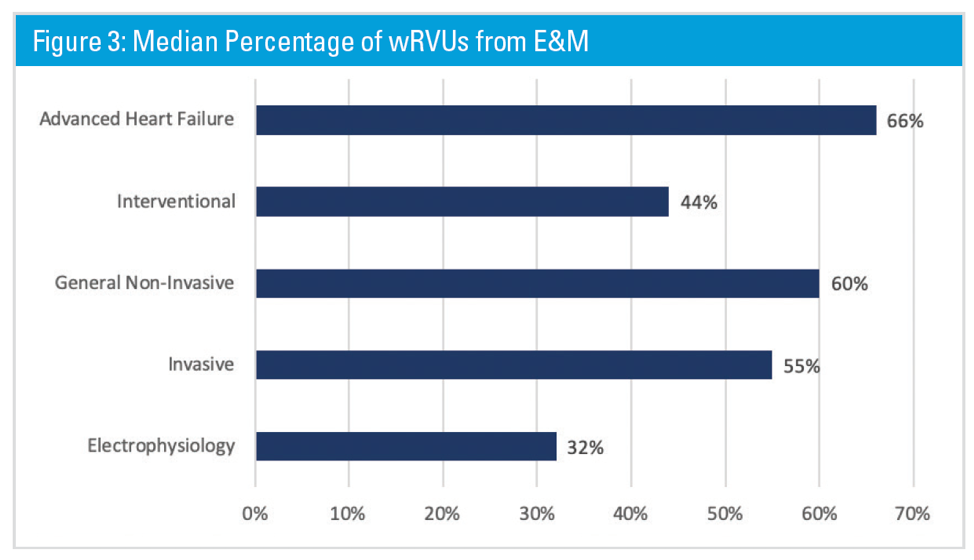 In the U.S., nearly 2 percent of the entire healthcare tab is spent on treating heart failure. Additionally, current national Medicare data show that nearly one in three heart failure patients will be readmitted to the hospital at least once following their first heart failure admission (Medicare LDS Standard Analytical Files, Q32017-Q22018, courtesy of Archway Health). Last, the number of heart failure patients is projected to grow by 46 percent by 2030, to over 8 million patients. For these reasons, Medicare and other payors are shifting significant financial risk to hospitals and other providers to better manage this growing and expensive patient population.

Given how diverse and sick this patient population tends to be, programs are turning to heart failure cardiologists to lead the way in better managing their care. In this model either all or perhaps the highest risk heart failure patients are identified and managed differently than the other cardiology patients. Often, formal heart failure clinics are established where advanced practice providers share in the delivery of care. As noted earlier, the total population of heart failure physicians is still very small, so this added focus by payors and programs (i.e., “demand”) will only exacerbate the supply side challenge.

At the end of the day these heart failure physicians are cardiologists and, in many cases, even have an additional year of fellowship training. While certainly not universal, additional training results in additional compensation. These facts lead me to think that compensation will probably trend upward as more data come in and the shift to value-based reimbursement continues.

Bolstering my bullish prediction for heart failure compensation is my own personal experience consulting with dozens of programs over the past couple years. While these data points are anecdotal and certainly not scientific, the compensation figures I’m hearing from the community are nearly universally higher than the median for our first year of published data.

Last – and I feel like I’ve beaten this poor horse to death – is the aging cardiology workforce. The 2019 survey data finds that over one in four cardiologists is age 61 or older (Table 2), several percentage points up from last year. This aging phenomenon is also what makes me bullish on cardiology compensation overall.

Time will tell whether I’m right or wrong. What do you think?