Is it time for a new cardiovascular alignment model? 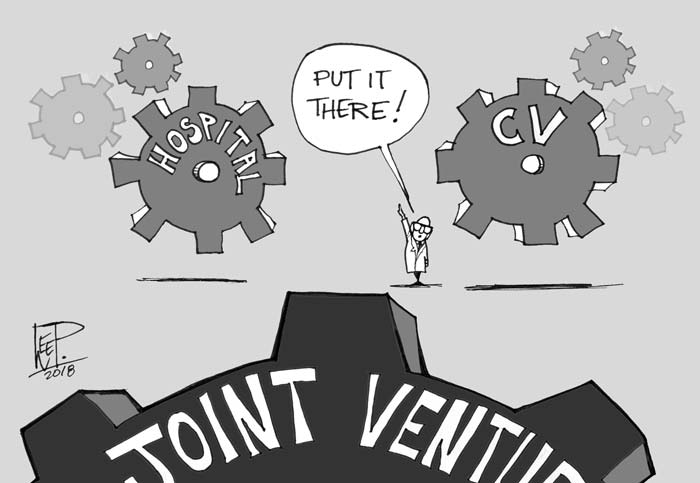 Starting around 2008 a major shift began in the delivery of cardiovascular care. Particularly, cardiologists and surgeons who had been predominantly in separate and private groups began integrating with hospitals and health systems. The most popular integration model was straight employment, but professional service agreements (PSA), co-management and other strategies were also used. Figure 1 (based on MedAxiom’s annual survey data) shows the trend of this change over time. 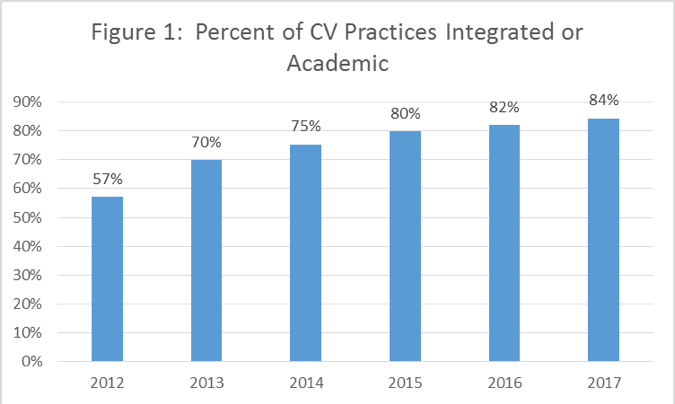 Fast forward to today and there have been some significant changes. First, reimbursement for nearly all services-whether in a hospital or in the ambulatory setting-has declined. While it may not be that the absolute dollar amount for a service has declined, it is nearly universal that the reimbursement increase has not kept pace with expense inflation. In other words, we are making less on each unit we provide.

Additionally, new value-based penalties have come into play that may seem quite innocuous on the surface, but given the slim margin on healthcare delivery overall, these penalties can have a major impact to the bottom line. At the same time, value-based systems have introduced expanded complexity on the data and documentation side, adding both provider and support staff time, and therefore expense. To sum it all up: cardiovascular care isn't as profitable as it once was!

These financial realities alone have put pressure on integration models. Adding to the stress are compliance rules that ostensibly (and sometimes interpreted mistakenly) force segregation of financial benefits that never come together to see an entire picture. Specifically, we put all of the cardiovascular provider compensation costs in the physician group enterprise even though much of the revenue generated by these providers will take place elsewhere, such as inside the hospital (whether inpatient or outpatient), in ambulatory centers and other locations.

This "rigged game" is amazingly effective at creating tension and some head-scratching business decisions. It has also caused both parties to consider alternatives. Still far from a trend, we are seeing entire groups of cardiologists and/or surgeons leave employment and re-form private groups. Part of this is driven by the continued migration of formerly inpatient only procedures into ambulatory and even office settings, breathing new financial viability into private cardiovascular practices.

At the same time the transition to a value-based reimbursement system continues to progress and creates new complexities and risks across the entire care spectrum. What we know for sure is that hospitals still need physicians and physicians still need hospitals. So is there a better model out there?

One of the challenges with employment, PSAs and other physician/hospital agreements is that they are just that - agreements. Legally then these contracts must have a defined beginning and a defined end, or at least a defined out. Even when the agreement itself may self-perpetuate, compensation arrangements will have prescribed evaluations to ensure fair market compliance. This effectively sets in place renegotiations and regularly puts the continued relationship on less than rock solid ground.

Exploring Joint Ventures
So what kind of relationship would not have a defined conclusion? A bona fide business relationship, which could take the form of a joint venture, comes to mind. The same migration of cardiovascular services from the inpatient setting to ambulatory and office-based venues expands the opportunities for physician and hospital joint ventures. In order to make them work, both sides may need to give a little, particularly hospitals in the short run as they are the current "owner" of these procedures.

Only under very unique circumstances would a joint venture have a defined end date. Absent such a rare case, joint ventures exist in perpetuity with the financial health and viability determining whether the parties continue or don't. By definition these relationships force shared decision making around all aspects of the business with both parties having perfectly aligned economics - when I win you win and vice versa. This sync on money is rarely in place in the vast majority of employment or PSA integration models I've seen.

As is often the case, there are different legal opinions on whether a joint venture relationship with employed physicians is kosher, but nearly all agree that under the right circumstances such a relationship is possible with both private physicians and those integrated through a PSA. So it may be possible to create a longer lasting model without completely throwing out the current integration strategy. Depending on the model and circumstances, it may also provide some reshuffling of economics more closely matching revenue with costs (see "rigged game" above).

Another benefit of the joint venture beyond just alignment of economics is the ability to jointly take risk. As we look to the future most of us believe that we will be taking more third party risk on care delivery. Given this, a model that legally allows physicians and hospitals to link arms for contracting-and to explore innovative payment arrangements-with third party payors sounds pretty exciting to me. In a short 5 to 10 years we may see more of our revenue from these types of contractual arrangements than from pay-for-volume contracts. This same relationship would allow for candid and much needed conversations on where the most cost-effective care setting that maintains high quality is for the patient.

Last is what I'll call the "looking over your shoulder" phenomenon with contracts. Particularly in states that either don't allow non-competes or only support very narrow ones, each renewal comes with the potential threat of partners turning competitors. In addition, there's always that unknown of whether the hospital will divide and conquer, support the development of a new internal competing faction or simply choose not to renew-which has happened recently within the MedAxiom membership. From my experience this leads to both sides holding back on truly leveraging the relationship to its fullest extent.

Closing Thoughts
A joint venture is just one tool in a large toolbox that can be used to form a mutually beneficial and lasting relationship between hospitals and physicians. The joint venture itself can take many forms and include multiple different services and care spectrums (see Figure 2 below). It can be part of a broader integration strategy or something done on a stand-alone basis. 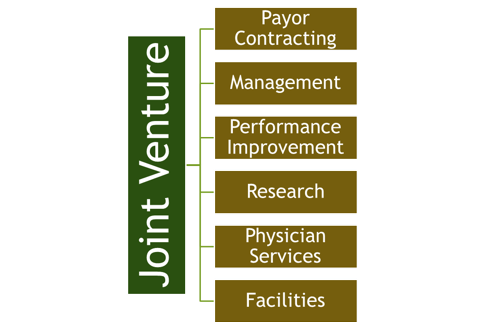 The beauty is that there is no defined end to the relationship. All parties (maybe there are more than two) have a vested interest in the entity’s success, will work together to make it happen and share in the resulting economics. Even if the ownership is not equal and thus the financial participation unequal, what is gone is the potential for one party to gain while the other loses. This disparity can unfortunately rear its ugly head in other popular models of integration.

The MedAxiom blog post is published every Thursday at https://www/medaxiom.com/blog