Less than two months ago MedAxiom polled top cardiovascular leaders from across the country during the Fall’19 CV Transforum to identify their “top of mind” priorities for the coming year. As in years past, physician/hospital alignment was in the top three (Figure 1). 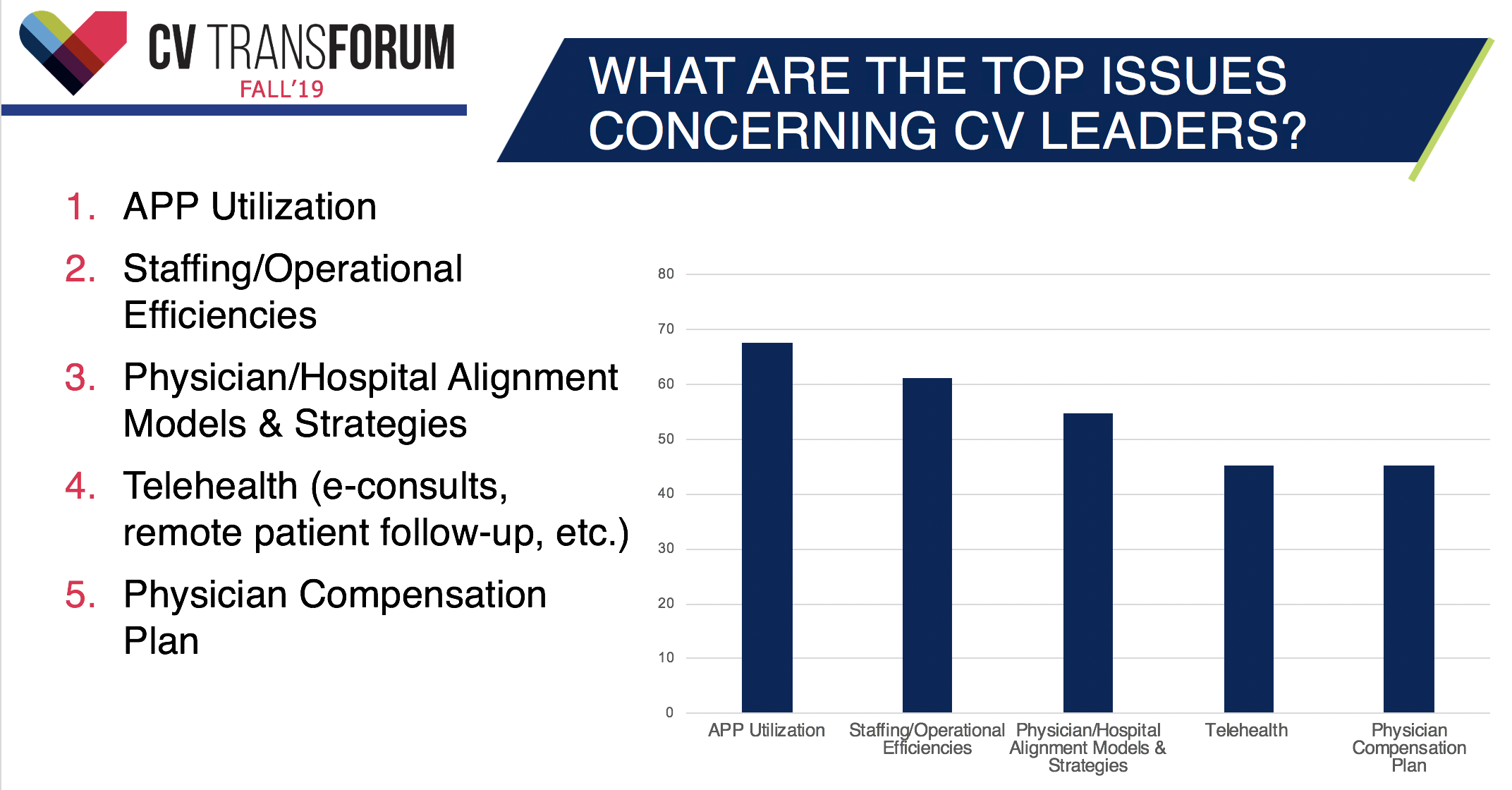 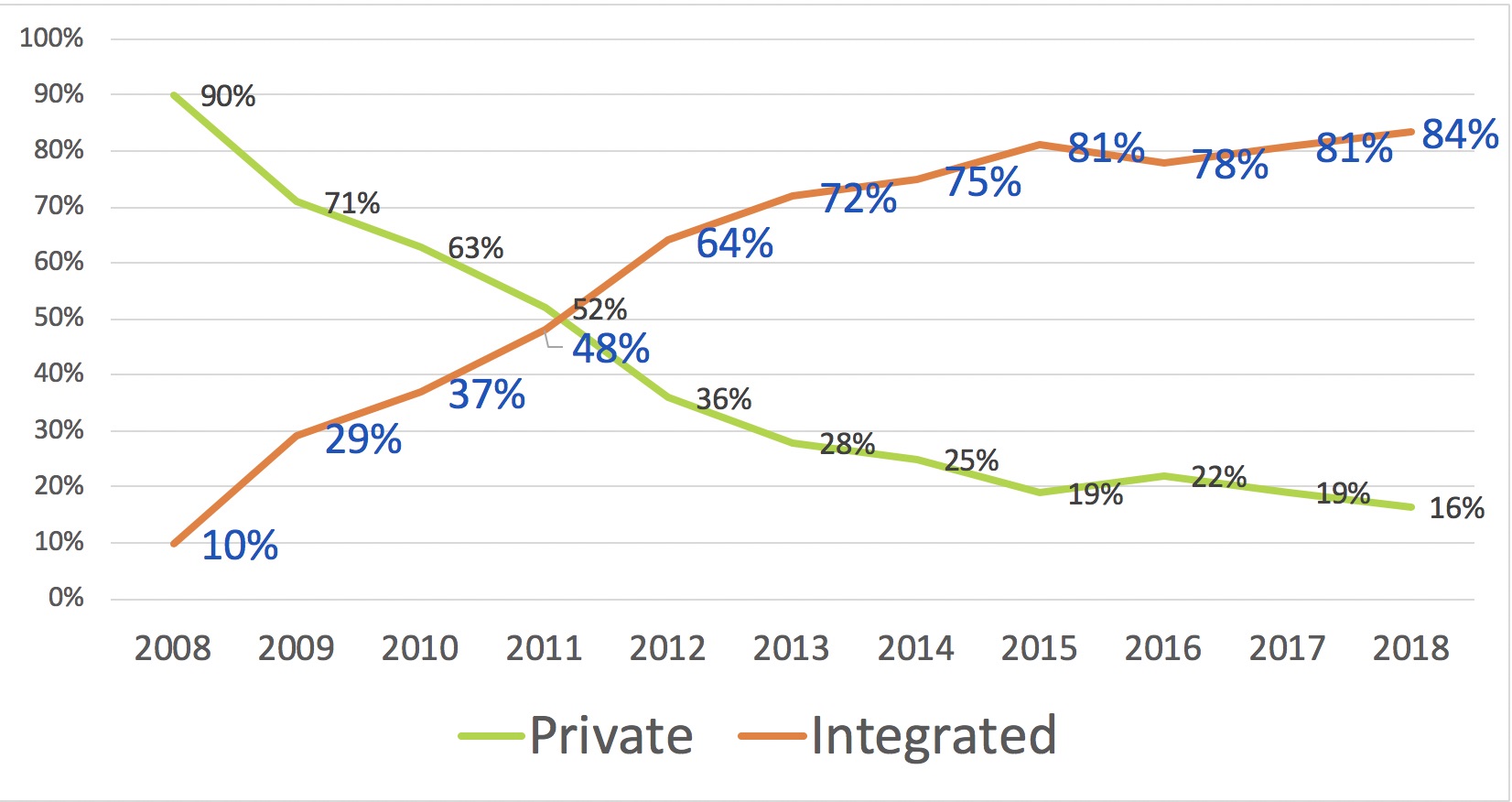 How can this be when an overwhelming majority of cardiovascular physicians are partnered with a hospital or health system and have been now for nearly a decade? How is alignment still cracking the top three for concerns of healthcare executives?

Let’s start by defining “integration” and “alignment” to get a better understanding of the trends we are seeing since the differences are critical. Merriam-Webster defines integration as, “the act or process of uniting different things.” In contrast, alignment is defined as, “the proper positioning or state of adjustment of parts in relation to each other; an arrangement of groups or forces in relation to one another.”

When we bring these definitions into the cardiovascular physician’s world we see that integration involves the transaction that takes place. Acquiring groups and moving the physicians into either employment or, much less frequently, a professional services agreement1. For those readers who have been through this process you might take exception that these transactions are “easy” and fairly straightforward. You get appraisals, create contracts and execute. It’s typically the negotiation of financial terms that takes the most time (and of course the operational and cultural transition once documents are signed).

However, years after these transactions the parties have yet to achieve that “proper positioning” or “arrangement of forces in relation to one another.” This lack of alignment will often become painfully apparent when it’s time to negotiate the contract. One or both parties will treat the process like a game to be won, not as a valuable partnership to be protected. In our roles as consultants we are often part of these processes and will often hear “you” and “they” as opposed to “we” and “us”.

In the vast majority of cases, the driving force behind integration was one of declining practice economics, not vision, mission or strategy. We all know this story too well, but draconian cuts to imaging and other procedure reimbursement, coupled with exponential growth in regulatory burdens, has driven the private cardiovascular physician group to near extinction. That leaves little wonder why we’re still struggling. 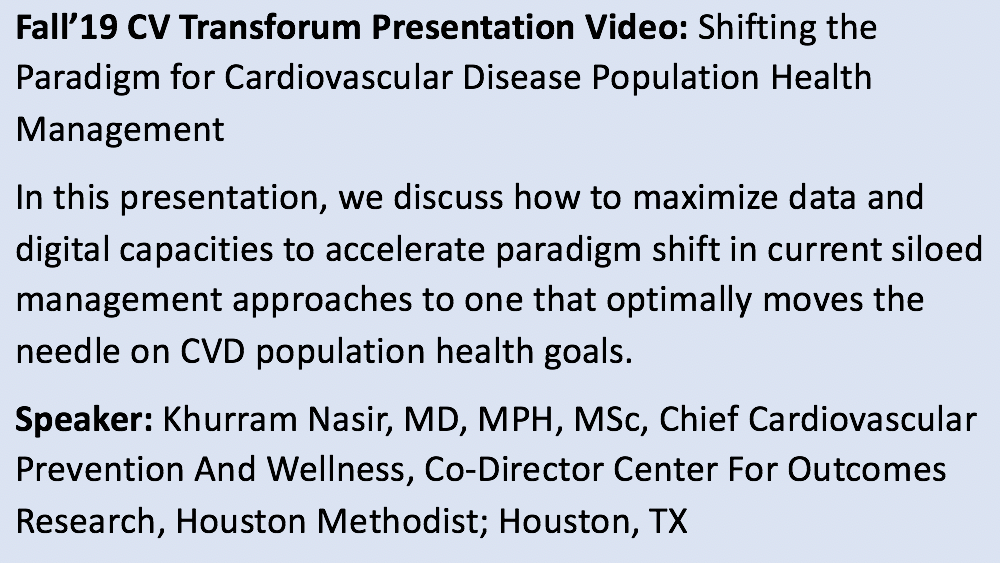 Compounding the problem are some self-inflicted organizational structures that perpetuate – if not promote – separation and operational dysfunction. First, most hospital/health systems employ (or lease) physicians through a separate physician entity. This entity not only has its own balance sheet and profit and loss (P&L) statement, which we’ll discuss next, it is also governed completely separately from the inpatient (hospital) resources.

While this may make sense from a legal and contracting standpoint, it certainly isn’t how the patient experiences cardiovascular care. These governance silos can create some obscene operational scenarios where prudent decisions in one entity actually cause exponential harm in the other. We’ve seen these scenarios all too regularly in our travels and they go both ways.

For instance, a practice with major communication challenges (phone support, test results, scheduling, etc.) may be directed to reduce support staff. Not surprisingly the next round of CGCAHPS shows yet another drop in patient satisfaction scores. Or the practice may unilaterally choose to reduce or drop an outreach site, logically focusing instead on coverage at the mother ship. Then it turns out this site was strategically critical to the health system which was in affiliation negotiations with the local hospital.

Second, in two-thirds of integrated models certain imaging services are moved out of the practice and over to the hospital as Hospital Outpatient Departments2. While this transition makes great economic sense and, in and of itself, is not problematic, the resulting impact to the practice P&L is quite devastating. As noted above, physician services are contained in distinct legal units which also have their own financial statements. An outsider might be reading this and thinking, “So what?  You can simply combine the P&Ls and manage as one.” While this is quite logical, it’s rarely the case.

The above financial scenario is reminiscent of the financial crisis that started in 2008. In large part it was created by segregating and then packaging sub-prime (aka junk) mortgages into different bulk investment vehicles. Once cordoned off from good mortgages, these junk investments were then stratified from top to bottom. In a fit of world-wide amnesia, investors forgot (disregarded?) that the entire lot were junk and began treating the top tier as if it were a grade A investment. Basically, they created financial silos and then started managing those silos as if they weren’t really connected. Does this sound familiar?

Learn more about the MedAxiom Consulting Team and how we can help you and your organization tackle issues such as physician/hospital alignment models and strategies, staffing/operational efficiencies, APP utilization and more.

1MedAxiom data shows that less than 10 percent of integrated CV groups are in a Professional Services Agreement.

Enjoyed the part one blog, nice summary of issues and dynamics. Thanks for sharing!