The Vexing Challenge of Physician Slowdown: How to Create an Effective Policy

Like perennial flowers appearing in the spring, each and every year the thorny issue of physician slowdown breaks into the top five concerns for cardiovascular group and program leaders. Rarely does a cardiologist practice at full throttle and then simply retire on a chosen date. Typically, he or she will reduce day and/or evening responsibilities to extend the ability to continue practicing. While this may seem like a positive approach, given the backdrop of projected physician shortages (Figure 1), it presents significant challenges for program leadership. 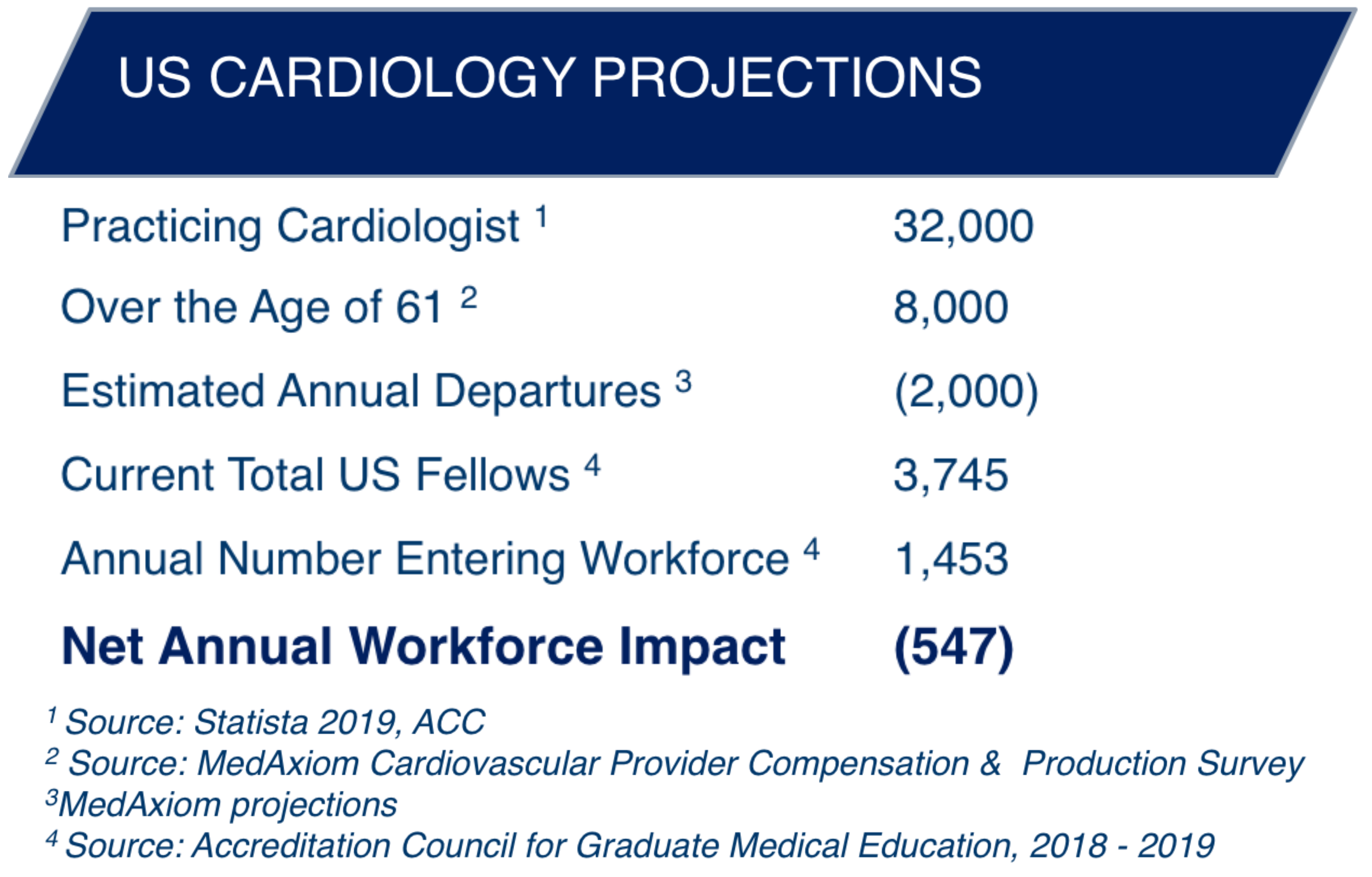 “We’re not anxious to end a doctor’s career,” says Larry Sobal, Chief Executive Officer of the Heart & Vascular Institute of Wisconsin. “If structured right part-time cardiologists can be extremely valuable particularly in an environment where supply is tight. At the same time you have to protect the vitality of the group and, at the end of day, you have to get the work done – all of the work, even those less desirable activities.”

If you ask 100 cardiologists to identify the worst part of their chosen profession 99 will likely answer night/weekend call responsibilities. Sleep deprivation and the stress of a 2 a.m. life-saving intervention coupled with long work hours takes a physical and emotional toll on the human body. Thus, the more that share in these undesirable duties, the better. Therefore, when a physician asks to be relieved – or even simply cut back – on call participation, absent a new hire the remaining cardiologists take on more. Money can sometimes fix this imbalance, but not always.

“We really want to maintain flexibility for these physicians, but at the same provide value to the overall group,” says Michael Kourany, MD, FACC, a member of the St. Vincent Medical Group Cardiology Executive Committee that created their slow down policy.  “It’s striking the right balance between high burden work – like hospital coverage and call in our case – and the high impact work, like reading studies and procedures.”

Compounding the stickiness of this situation is the fact that predominantly those asking to move into a reduced capacity are senior members of the group, with long tenures of service and – in many cases – pioneers who founded the group. This heightened status can make conversations around policy development emotional, increasing the chances for tension and negative fallout.

This Problem Isn’t Going Away

Recent data published by MedAxiom1 suggest this challenge will not be leaving leadership’s desk anytime soon. As shown in Figure 2, more than one in four cardiologists is age 61 or older. While those data by no means suggest retirement is imminent for this cohort, it is very likely that these physicians are nearer the end of their careers than the beginning. 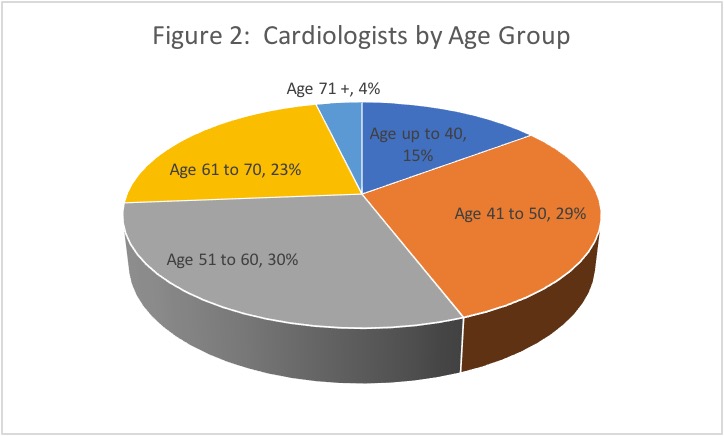 Further, data show that the older a cardiologist becomes the more likely he or she is to reduce call participation at some level (Figure 3) and reduce daytime workloads (Figure 4). In fact, at age 71 and above, less than half of working cardiologists are taking full call and at the next decade younger, nearly 20% have reduced call participation. Likewise, one quarter of cardiologists age 71 and old have reduced daytime workloads. 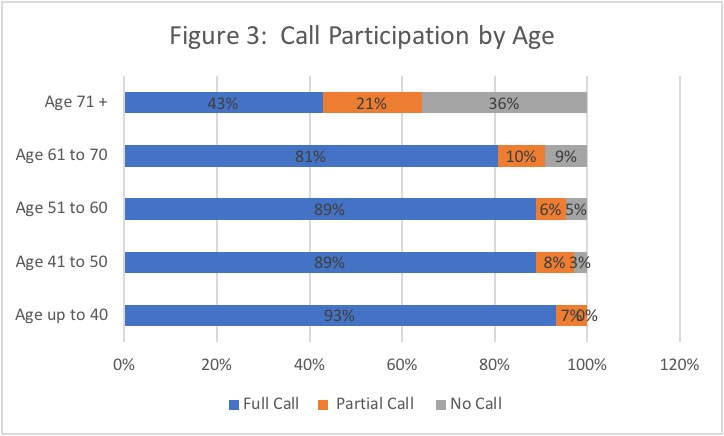 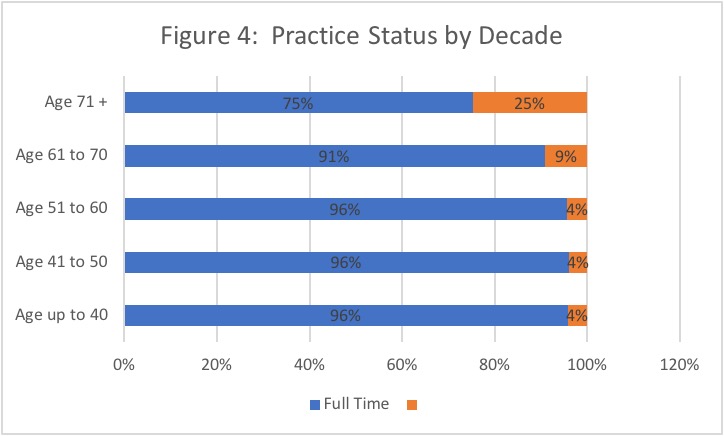 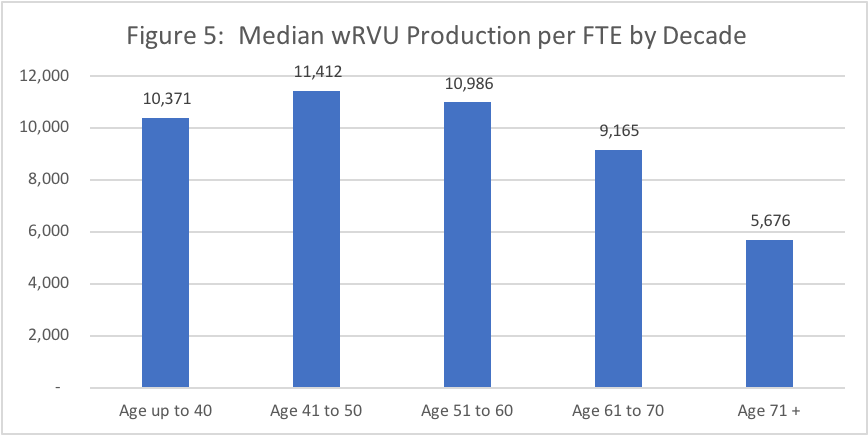 Here lies a significant part of the slowdown challenge. If a physician reduces or discontinues call participation but continues to carry full or nearly full daytime workloads, the practice may not feel that it can support a full new hire. It is rare to find a physician who is only looking for call responsibilities, although some larger programs have added cardiac “nocturnists,” so a new hire will bring additional daytime capacity that could diminish production of the remaining employees. The flipside is that absent a new hire there will be heavier call burden for those remaining. On top of all of this may be space and exam room capacity issues with the addition of another daytime doctor.

As noted earlier a common way to deal with slowdown is through compensation. Figures 6 and 7 show the impact of practice and call reductions on median compensation as well as the influence that reductions in duties have on wRVU production. What is noteworthy is the very minor effect that reducing call participation has on wRVU production per FTE (Figure 7) with just a 3% diminishment of the median per FTE. Whereas reducing from full to part-time status results in a greater than 40% reduction in median wRVUs per FTE. 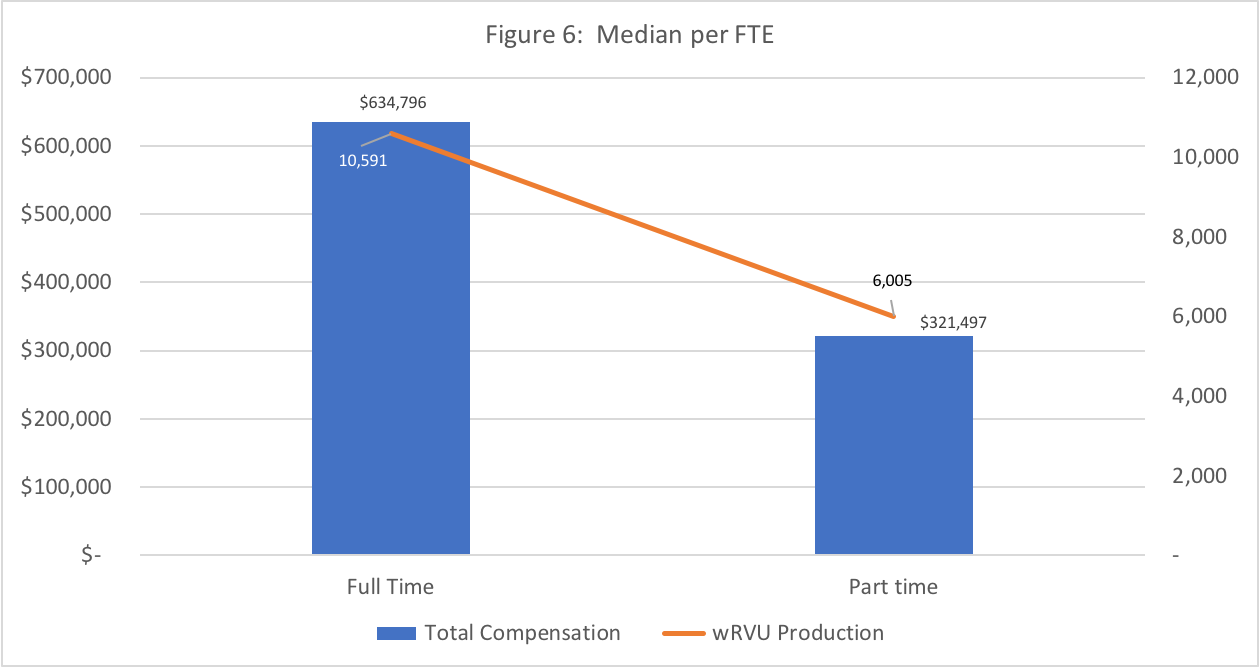 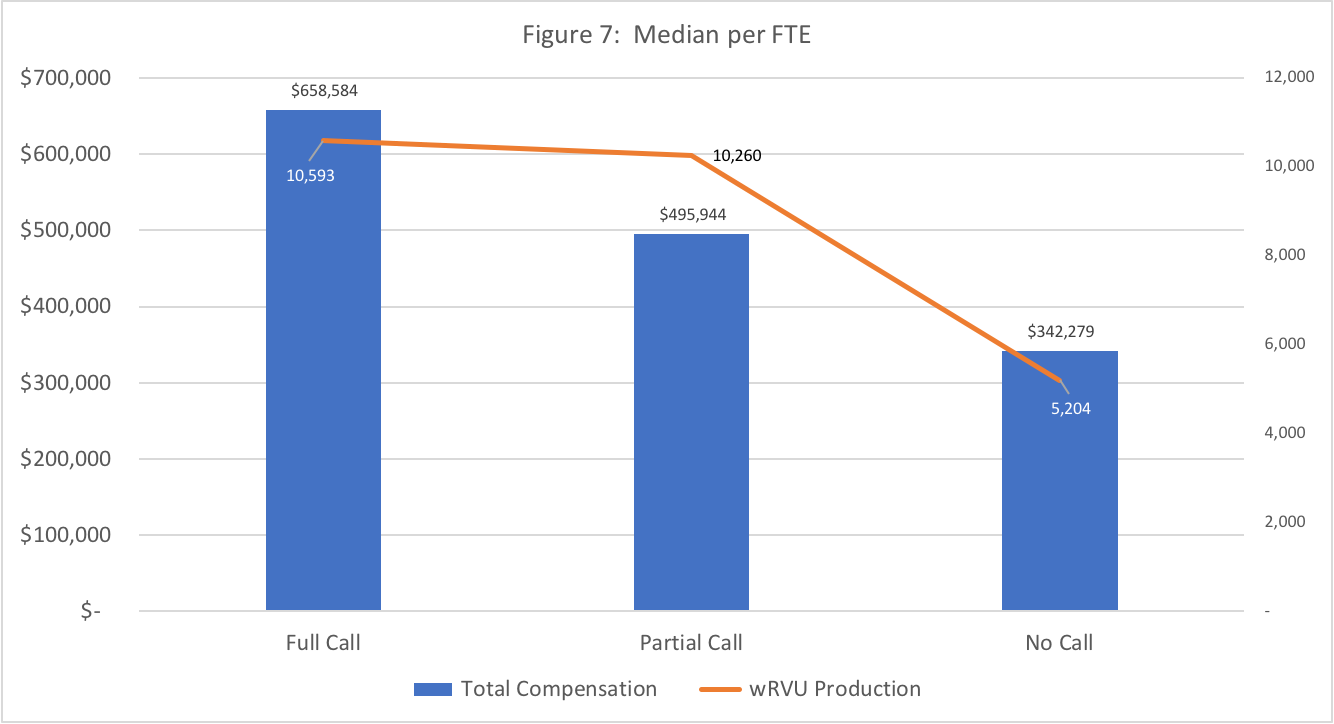 Based on decades of experience with physician slowdown and through sharing of best practices by the MedAxiom membership, there are three “commandments” or “must haves” for creating an equitable and effective policy:

1. Have a predefined and finite time that a physician can remain in reduced status.

With the backdrop of physician shortages, it is appropriate to be as accommodating as possible with cardiologists who want to slowdown. At the same time, leadership’s charge is for the health of the entire organization. Having a physician in a reduced capacity may be fine in 2020, but by 2022 it is untenable. Thus, it is paramount that a group’s slowdown policy includes restrictions on the amount of time a physician can remain in this status. For some groups this is a year, for others two or more years.

This does not have to be a trigger. For groups with an effective executive leadership structure, a policy that provides for annual or bi-annual renewals may be a perfect fit. These types of renewals are often companioned with preset notice periods – for instance 90 or 180 days – in the event that the status is revoked.

2. A reduction in workload or call participation must have an impact on compensation

Looking back 25 years or so, it was not uncommon in cardiology practices for the founding senior members to be able to discontinue call participation without any change in compensation. This model worked if there were only one or two in this status, although even then there often tensions in the ranks. If that number swelled to four or six, the economics came unglued.

As the data above clearly show, reductions in work – whether call responsibilities or daytime activities – will have blunting impacts on wRVU production. Absent an overall loss of patients or market share, that work still needs to be done so others will necessarily fill the void. If this additional work is not accompanied by additional compensation – or worse by a pay cut – negative feelings tend to bubble up which can cause a rift in the practice.

Closely related is the group’s internal distribution plan (IDP). Even the majority of employed cardiology groups have some level of pooling where the model that creates the pools is different than how the individuals get paid. Rather than change the entire IDP to accommodate a physician in slowdown, pull that physician out of the plan and compensate him or her commensurate to their new job description. Again, as a rule there should be some reduction in pay for a reduced workload.

3. Create a formal policy – do not address each request individually and uniquely.

As noted above, it is often the most tenured and – in many cases – the founding members of practices who request reduced call burdens and/or daytime activities. Not having a formal policy in place before the ask is made can cause resulting rules to feel personal and arbitrary. To avoid this, leadership is wise to spend time creating a policy even if a request does not appear imminent.

Here are some components of a formal policy to consider, which are important, but not to the level of the three commandments. These elements tend to be more local and molded to individual cultures, so some groups may need them, others may not.

Balancing the needs and desires of individual physicians with those of a group is a challenging endeavor. There are many opportunities for hard feelings or damage to the group’s effectiveness. Compounding these efforts are the realities of physician shortages. With these high stakes it is best to proceed thoughtfully and commit the time necessary to consider all aspects.

Above all create a formal policy; do not address each request individually. Reductions in workload must include a reduction to compensation. The exact impact is unique to each group, but rarely can an internal distribution plan accommodate all the nuances of slow down. Last, allow the group the flexibility and authority to protect its ongoing concern. This is leadership’s duty.

Creating a solid physician slowdown policy is complex but not impossible and available data can help the process. In the end, however, it is a matter of leadership committing time and intellect to the process to create rules that fit the needs and culture of their respective groups.

Overcoming the Challenge of Physician Slowdown