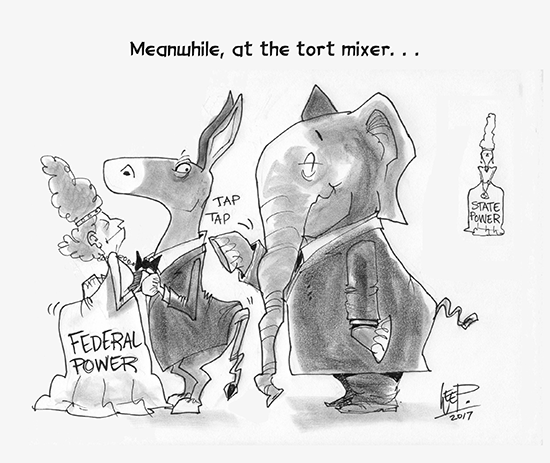 The current focus on the status of the Affordable Care Act (ACA), American Health Care Act (AHCA) and the Better Care Reconciliation Act (BCRA) is polarizing, to say the least. So it’s possible that all the emotional energy being put into that debate has allowed another thorny health legislation to fly under the radar. The Protecting Access to Care Act (PACA), proposed by Iowa Republican Steve King and otherwise known as H.R. 1215, passed through the House last week with 218 “yes” and 210 “no” votes. Not surprisingly, the vote largely followed party lines. It now moves on to the Senate for debate.

In case you have not yet heard about this legislation, it essentially represents a form of national tort reform and will likely be just as hotly debated as overall health care reform. In summary, the bill caps medical malpractice lawsuits by restricting plaintiff non-economic damages to $250,000 for patients who are covered by federal health insurance through Medicare, Medicaid, the ACA, COBRA policies, and military insurance. As I present viewpoints on both sides, you’ll see that there are some intense feelings and strong arguments on whether this is, or is not, a good thing.

Let’s start with what proponents of this bill have to say. For starters, the supporters profess that the bill adopts many long-overdue reforms that have been thoroughly tested in various states. They argue that tort reform has already proven successful in increasing patient safety, ensuring that injured patients are compensated quickly and fairly, and fosters an environment for affordable and accessible medical liability insurance. Furthermore, they note that the Congressional Budget Office (CBO) has estimated that passage of the PACA would save federal taxpayers at least $50 billion over a ten-year period. In addition, the CBO has estimated that the reforms would lower premiums for medical malpractice insurance by an average of 25 percent to 30 percent, thus changing the potential that physicians choose a location to practice in based on the medical liability climate (and cost).

This strong and passionate support is founded on the idea that, while medical liability premiums have leveled off in the past few years, physicians and hospitals still fear litigation, expect lawsuits, and feel the psychological burden of navigating the complex medico-legal system. Although the costs are tough to quantify, some studies suggest that about 3 percent of the nation's $3.2 trillion in health care spending, or nearly $100 billion, is related to malpractice cases and defensive medicine (ordering unnecessary tests and treatments to protect against litigation).

Some people, including HHS Secretary Dr. Tom Price, say the cost is much higher; Price suggested in a 2010 interview that defensive medicine accounted for a quarter of all U.S. health care spending. Price has called for establishing clinical practice guidelines for physicians to use to defend malpractice claims: "If your doctor does the right thing for a given diagnosis or a given set of symptoms, they ought to be able to use it as an affirmative defense in a court of law," Price said last year.

Advocates point out that there are 33 states that have imposed caps on any damages sustained in medical malpractice lawsuits. The caps vary from state to state, ranging from $250,000 per incident to as much as $2.25 million. Since tort reform measures are highly variable across the states, and state laws are always subject to annual changes, this bill would bring standardization and consistency across the U.S.

Both parties are more interested in opposing each other than with working in the best interests of citizens and solving problems together.

In other words, supporters of this legislation feel it puts patients first by protecting access to care and controlling costs through much-needed medical liability reforms, and by wanting doctors, nurses, and researchers to focus their time and talent on helping patients—not on conducting expensive and unnecessary tests purely to prevent a lawsuit.

There are equally strong and passionate opinions on whether federal tort reform would be beneficial, or is even necessary. Let’s explore that position.

For starters, opponents strongly object that the PACA legislation is being fast-tracked through Congress without adequate transparency, hearings and with limited debate. They argue that while there are 33 states with some form of cap, the diversity of approach among the states, which may be viewed as inconvenient by members of Congress and special interests, is a feature of our system of federalism. It represents the U.S. Founding Fathers’ commitment to State's rights, intended to ensure the ability of states to serve as “laboratories of democracy” that allow the nation to test the outcomes of various policies—and give their citizens freedom of choice as to systems of government and the law under which they prefer to live.

Furthermore, opponents note that the House Judiciary Committee, in marking up the legislation, specifically rejected an amendment that would bar pre-emption of state constitutional provisions. Overriding state constitutional provisions and interpretation denies states, and their citizens, essential liberties as well as important checks and balances on the power of the national government.

In other words, opponents feel that this bill specifically strips legal protections from anyone who’s federally insured, in most cases our most vulnerable populations—and goes too far in offering protection for physicians and staff who abuse or neglect patients. Furthermore, those opposed to tort reform argue that such caps or limits on damages are arbitrary, and that damages need to be assessed on a case-by-case basis because a blanket approach is unfair to severely injured plaintiffs whose life-long costs of dealing with medical injury are too small to cover the economic losses they incurred, or, in the case of plaintiffs who win at trial, too small to cover the losses that juries think they incurred. Opponents also argue that tort reform measures don't prevent insurance rate hikes or deter physicians from locating in states with higher malpractice premiums.

As you can see, there are strong opinions on both sides of the argument. Not surprisingly, the positions are largely divided between Republicans and Democrats.

But here’s the twist. The same “state-or-federal authority” arguments that Democrats and Republicans are having over health care reform (especially as it relates to Medicaid) is completely reversed when it comes to state or federal authority related to tort. How contradictory and confusing is that?

The political stalemate in Washington has reached a point where both parties are more interested in opposing each other than with working in the best interests of citizens and solving problems together. I don’t have confidence that our two political parties can (or will try to) work together to solve our health care challenges with long-term solutions. For me, this is another reason to consider taking health care out of the hands of our elected officials and ask if it is time to EMBRACE a better idea.