Why is Cardiology Compensation still on the Rise? 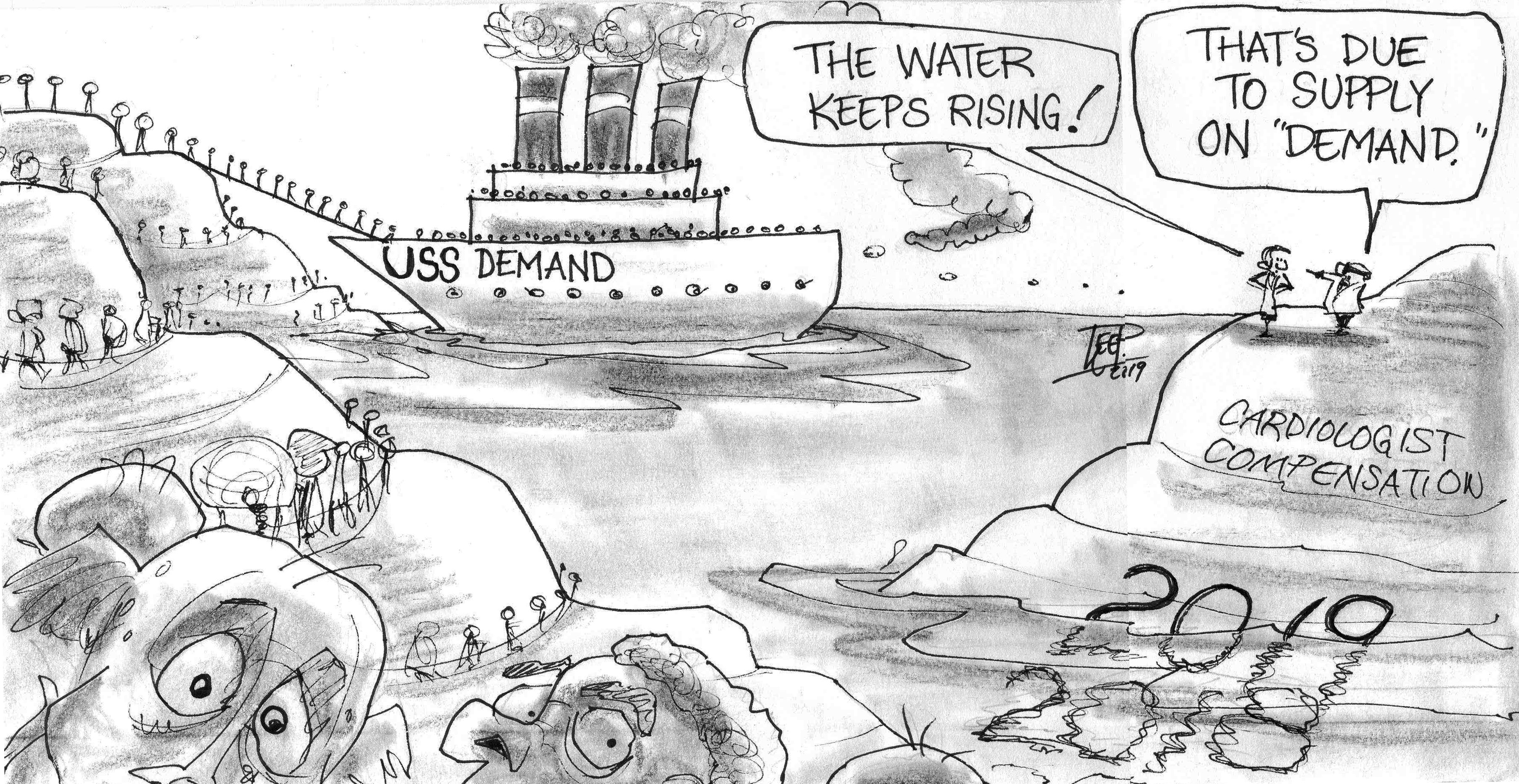 Trends in the Data

For the fifth year in a row and for the seventh year out 10 overall cardiology compensation increased from the previous year, with the median now sitting at $586,888 (see Figure 1).  This despite many predicting that incomes would come down, including my audience at the Spring CV Transforum where data from the 2019 MedAxiom survey were first debuted.  When polled nearly 70 percent predicted that total compensation for cardiologists went down in 2019 (based on 2018 data), with nearly identical results whether considering employed cardiologists or those in private practice. 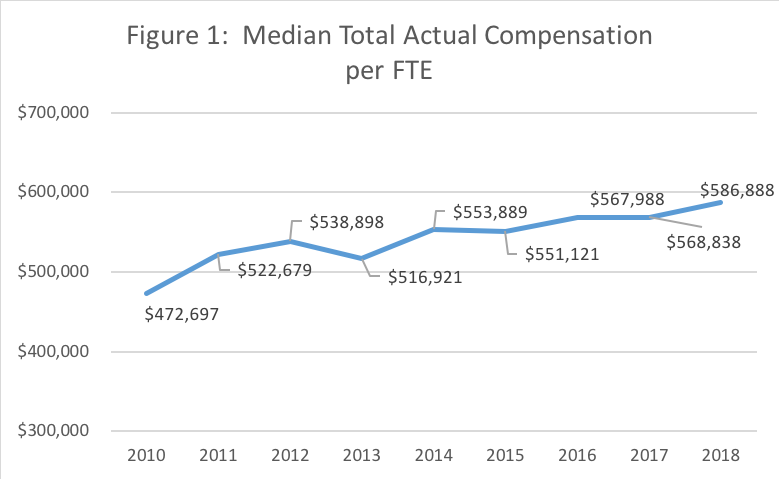 Yet despite these premonitions, overall total cardiology compensation ticked up more than 3 percent from last year.  Employed cardiologists gained nearly 5 percent while cardiologists in private groups jumped up 16 percent (see Figure 2)!  Now while this latter increase is probably due in part to some level of survey bias, there are some continued trends that give the data credibility. 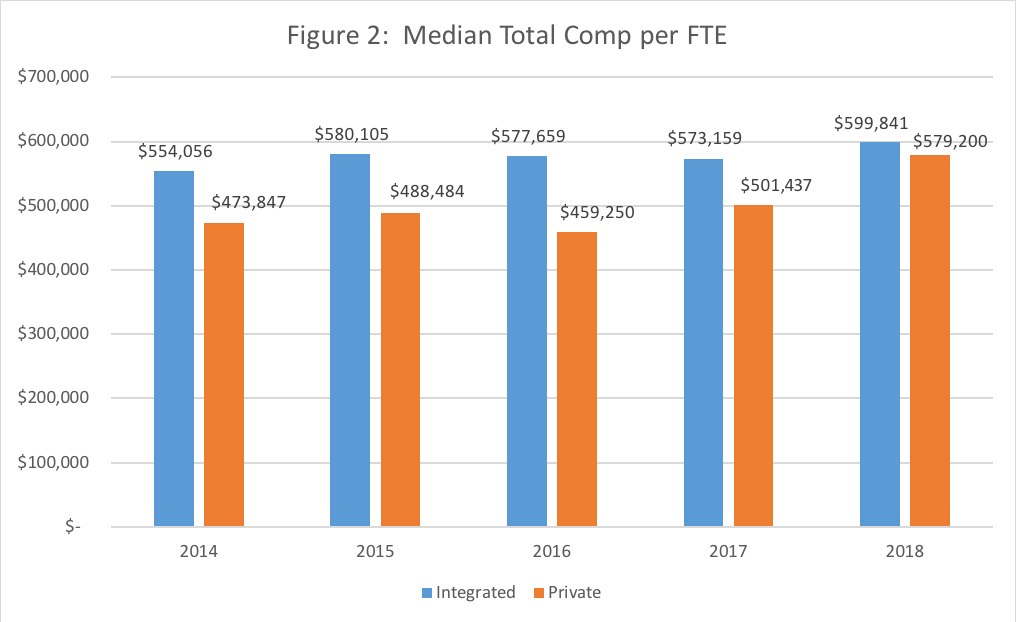 In Figure 3 we see total revenue trends for private cardiology groups, trending both clinical revenue and total revenue per FTE cardiologist.  Both lines are trending up and in 2018 there is a $65,000 delta per FTE between clinical and total revenue.  The difference in these numbers represents innovative ways that private cardiology groups are making ends meet.  This revenue could come from myriad different sources, but a couple good bets would be hospital contracts for call, co-management, directorships or other payments and retails sales of pharmacy products, dietary resources and the like.  These other revenue streams have been so effective that for 2018 the gap between integrated and private physicians for total compensation has narrowed to just 3.5 percent, the lowest we’ve ever reported. 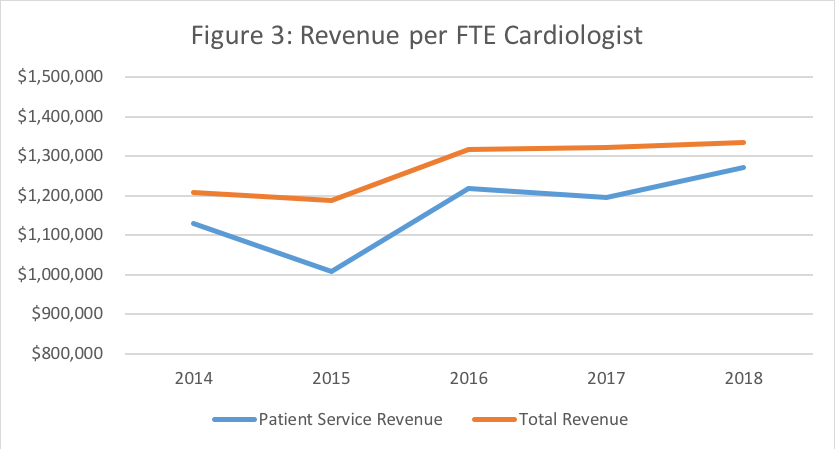 So, when the majority of those who work in the field of cardiovascular medicine, many who are leaders in their programs, predicted that cardiology compensation would come down why were they wrong?  Why is cardiology compensation continuing to trend upward when for years now many of us on the inside felt that incomes would start falling?  I have a couple solid theories.

Like all of America, the cardiology workforce is aging.  Digging into the 2018 data we find that 1 in 5 cardiologists is now over the age of 61.  While this age by no means indicates that retirement is imminent, it does suggest a section of the workforce that will either slow down (discussed a bit later) or discontinue practicing altogether within a matter of years.

When going a level deeper within each subspecialty area this age distribution hits interventional and general/non-invasive the hardest, with 29 percent and 32 percent of their physicians over the age of 61 respectively (see Figure 4).  It should be noted that part of the reason for the higher age distribution in the non-invasive cohort is that often cardiologists who discontinue providing invasive services will be reclassified as non-invasive.  Leaving the cath lab and discontinuing wearing lead and exposure to radiation can prolong clinical careers and many opt for this path. 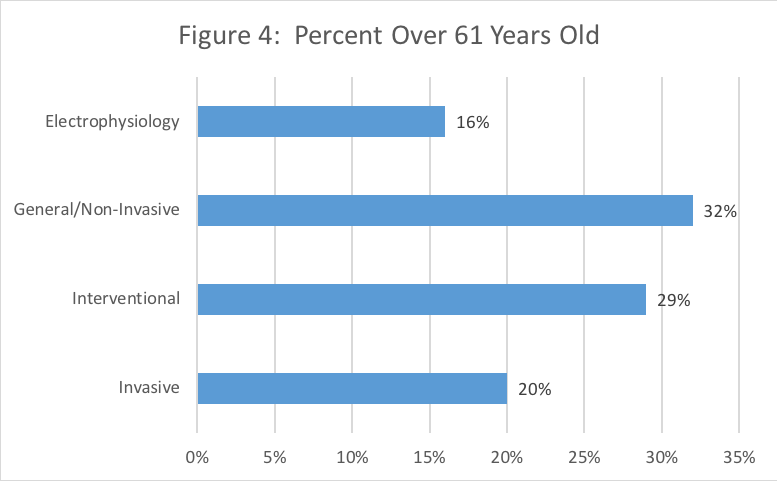 Unfortunately, our pipeline of new cardiologists does not appear adequate to replenish the pipeline.  Figure 6 considers the national cardiology workforce, attempting to estimate – not a perfect science for sure – the number of departures with those coming out of fellowship.  As can be seen the shortfall is significant.  Even if these estimates are off considerably there is high likelihood, we won’t be adding surplus cardiologists any time soon. 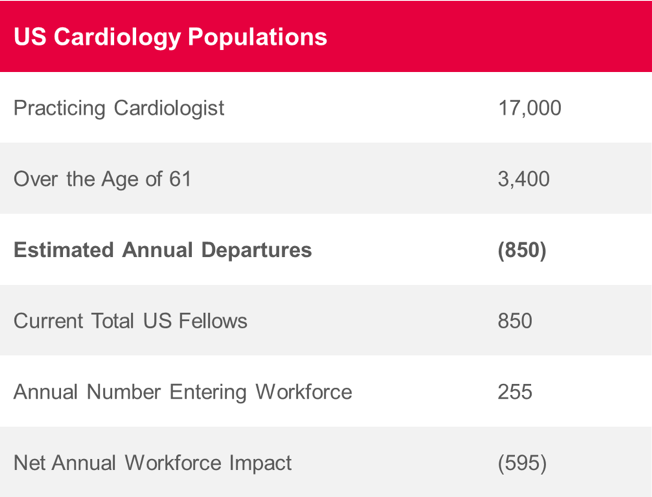 Corroborating this theory is research released just last month by the Association of American Medical Colleges (AAMC), “The Complexities of Physician Supply and Demand Projections 2016 – 2030.”  This research shows that overall the United States will experience of shortage of physicians between 42,600 to 121,300 within the next 10 years.  More than a third of this paucity will be in primary care, the expected relief valve for chronic disease management including several cardiovascular conditions.

At the same time, the AAMC research notes there will be increase demand for physician services due to the growing American population (projected at 11% in 10 years) and growing percentage over the age of 65 (which will hit 50% by 2030).  In addition, the obesity trend in America has slowed but not reversed with a projected increase in overall chronic disease prevalence (CDC estimates).

In college I took several economics classes as part of an eventual business degree.  I can remember thinking most of the theories were ridiculously complex and full of assumptions that made my simple brain hurt.  However, the one that I could grasp fundamentally and made great common sense was that of supply and demand.  If demand is high and the supply is short, the price will increase.  Yep that makes sense.

At the same Spring CV Transforum meeting referenced earlier I asked the audience to indicate by show of hands whether they were actively recruiting for cardiology.  Nearly every digit reached for the sky!

So, the simple answer to why cardiology compensation continues to rise?  It’s a matter of supply and demand.  Services for cardiology continue to expand – and are still well-rewarded in our contemporary fee-for-service economy – while the number of providers is at best remaining stagnant.  These counter forcing trends have put continued upward pressure on incomes.

Looking ahead to the future, I would predict this state of affairs to remain for quite some time – probably the better part of a decade.  After all, we don’t turn out new cardiologists in just a couple months.  Perhaps artificial intelligence (AI) will alleviate this pressure, as Eric Topol, MD, predicts in his new book “Deep Medicine”.  However, even he points out this won’t have a major impact for probably at least 10 years.

In the meantime, it’s probably time to stop predicting the decline of overall cardiology compensation.  It looks pretty solid to me.  At least based on the economics of supply and demand.

Hi, Thanks for posting this article. I really liked the article, Could you share article on Minimal Access Cardiac Surgery also. Again thanks for your insightful article.