“We are thankful to our membership community for continuing to provide robust data that allow us to generate this report,” notes Jerry Blackwell, MD, MBA, FACC, MedAxiom president and CEO. “While changes to compensation models may be on the horizon, we are resolute in our commitment to working with our members and partners to explore new ways to transform cardiovascular care, together.”

“We have successfully used the MedAxiom Cardiovascular Provider Compensation and Production Survey Report to effectively gain an understanding of how our groups compensation compares to national trends and our comparison groups,” says Jamie Grebosky, MD, chief medical and quality officer, Asante Health System. “It is an invaluable tool.”

Like in years past, EP and interventional physicians are the top earners amongst cardiologists, with median compensation per FTE reported at $678,495 and $674,910 respectively overall. Although the gap has narrowed over the years, cardiologists in integrated ownership models out-earn private physicians at every subspecialty level.

After several years of effectively treading water, median total compensation for integrated physicians jumped up over 9% in 2019 as compared to the previous year, to $636,521 per FTE. A nearly 20% jump was reported by private physicians comparing those same two years, with 2019 median total compensation coming in at $619,091 per FTE as compared to $517,600 per FTE the previous year.

At the median levels the South is 20% more productive, as measured by wRVUs, than the next closest region – the Midwest – and over 30% more productive than the West, the region with the lowest reported median. Conversely, the lowest wRVU producing subspecialty – heart failure (HF) – earned the highest compensation per wRVU of $83.41 at the median.

Cardiologists between the ages of 41 to 50 produce the most wRVUs per FTE at the median, coming in just slightly higher than the next oldest decade at 11,412 and 10,986 wRVUs respectively. Despite the higher productivity, cardiologists between the ages of 51 to 60 earn more per FTE than their younger colleagues, with median total compensation of $668,365 per FTE compared to $637,273 for those age 41 to 50. Beginning at age 61 median wRVU production per FTE drops 20% from the highest producing decade and another 32% beyond age 71.

MedAxiom has further determined that healthier programs maintain a new office patient to office follow-up ratio that is north of 30%. In other words, in health practices three out of every 10 office visits are new patients.

Making their debut in 2020, MedAxiom has added new interventional measures: PCI acute myocardial infarction only (STEMI) and PCI chronic total occlusion (CTO) only. Although these measures are new, we were able to create historical trends with data available.

Overall production has remained relatively stable over time, as measured by median wRVUs per FTE surgeon. Cardiac surgeons produce around 1,000 more wRVUs per FTE than vascular at the reported medians, or a 10% delta.

Like their physician colleagues, APPs predominantly tend to be employed by a hospital or health system, with just 16% residing in private practices. For the second straight year cardiology APP median total compensation has trended upward, reaching $107,600 per FTE in 2019. For cardiology APP compensation, there is less than a 1% difference between these cohorts at both the median and 75th percentiles, with just a 1.5% difference at the 90th. Only at the low end of the pay scales – the bottom quartile – is the difference significant.

Unlike compensation, the ownership model does make a difference in wRVU production per cardiology APP. Cardiology APPs in the private group model produce 12% more wRVUs per FTE at the median than those in integrated environments, with median per FTE wRVU production of 1,448 and 1,289 respectively.

Of note, compensation from all non-clinical sources now represents 10% of a cardiovascular physician’s overall compensation with a median annual total of $56,471. Hospital/health system incentive compensation appears to account for more than half of that total, with the median of $27,136 paid per FTE in 2019.

A total of 168 groups, representing 2,363 full-time cardiovascular physicians, completed this year’s MedAxcess survey (providing 2019 data). In addition, there were 119 part-time physicians whose data were used in some of the findings, particularly the section on volume trends, for a total of 3,490 providers (physicians and APPs). The median size of the responding groups to this year’s survey was 11 FTE physicians. 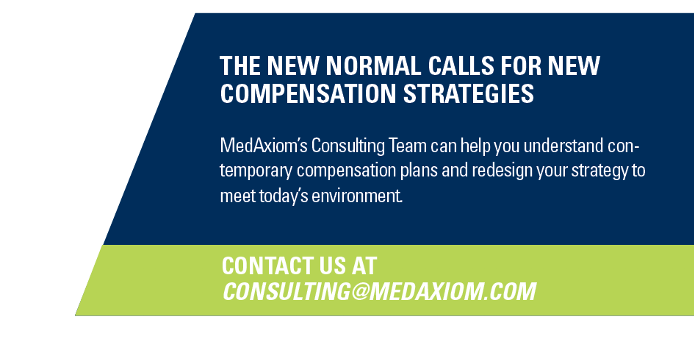